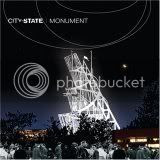 New today from DC's City-State: Monuments, the band's debut LP and the follow-up to 2006's Wolves +4 EP. Monument was recorded with original member Matthew Kalinowski, who has since parted with the band and Forrest Yingling has taken his position (guitar/keys) in the current lineup. The album is a bit brief, weighing in at seven new songs (plus 2 remix tracks of songs from the EP), but what the album lacks in length it makes up in depth.

Monument is at all times ominous, somber, and melancholy, a razor blade to the listening vein, pouring out catharsis with every track. Even on the brighter, beaming songs like "Arlanda Terminal" the sound returns to the bleak influences of Joy Division and even Television (the latter of which had its start in Delaware, how about that?). "Great Lakes" is a darkly beautiful gem, which vaguely pulls forth a comparison to Portishead with its tympanic keyed intro and aesthetically dreary vocals.

City-State takes their name from the unique situation that Washington, DC finds itself in, being a city but never a state. As emotionally taxing as that must be, there is much more between the lines of this album than political subdivisions. The perfect soundtrack to short days and long nights, Monument is one more example of great music in the Baltimore/DC metro.

Click the album art above to buy Monument by City-State.
Posted by blawk359@gmail.com at 2:47 PM